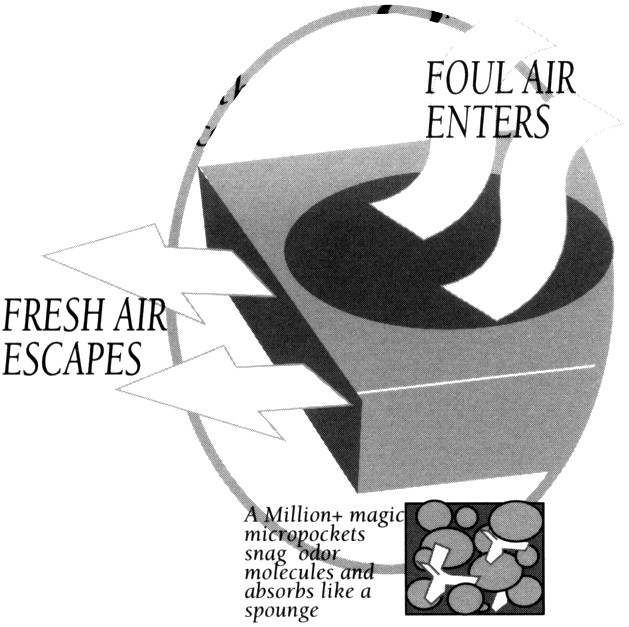 Activated Carbon Odor Removal is FAR superior to baking soda for removing all types of smells.  Consider this, activated carbon is used in the space shuttle and submarines to purify the air astronauts and sailors breathe.  Its capabilities as an adsorbing media have been proven and well known for many years.  BioStrike https://biostrike.com now brings this space-age technology to the consumer in convenient, easy to use packages to control odors and make a healthier, more pleasant life at home.

BioStrike uses coconut shell based activated carbon.  This type of carbon has the highest adsorption efficiency for gasses of the type that are associated with smells.  Each Odor Magic product (OMF, OMT, OMK and OML) contains activated carbon, which has over 30,000 square feet of odor-adsorbing area (about one football field).  By attaching very small particles of carbon to the open support structure of non-woven polyester, odor bearing air can more freely circulate through and over the carbon; thereby, increasing its efficiency as compared to granular types of carbon and thick boxes of baking soda used in competitors’ products.  In controlled tests by an independent lab, the activated carbon material used by BioStrike adsorbed odors more than 50 times better than baking soda.

The larger Closet Magic and Cigar Magic contain more than 12 times as much carbon as the smaller Odor Magics.  This makes them better suited to larger enclosures such as closets, basement areas, boats, RV’s and cars.

BioStrike pet products combine activated carbon with other mineral-based absorbers for a more efficient removal of ammonia-based smells from urine and feces.

BioStrike products are meant for use in areas where quantitative performance results are difficult to obtain.  The consumer’s nose is the best test probe.  No specific laboratory test results of “real life” situations are currently available; although, the adsorption capabilities of activated carbon are well-known and documented to be far superior to baking soda.

Your nose will verify this fact.